On the 12 May Ingatestone turned 175.  No we haven’t been building the layout that long, this was the birthday for the prototype station at Ingatestone in Essex on the Great Eastern mainline,  which is our inspiration.  One of the team was able to go along to the festivities, and while Kev will be writing …read more. 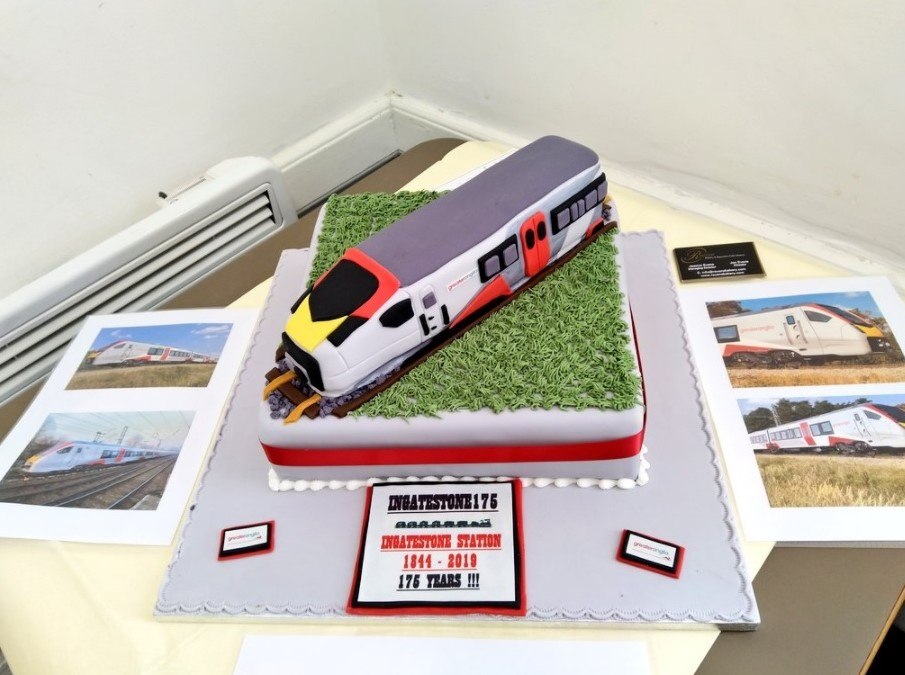 On the 12 May Ingatestone turned 175.  No we haven’t been building the layout that long, this was the birthday for the prototype station at Ingatestone in Essex on the Great Eastern mainline,  which is our inspiration.  One of the team was able to go along to the festivities, and while Kev will be writing a fuller report of the day for a future bulletin, we felt we had to show the cake that was made, which featured a representation of one of the new trains that will enter service this year.

Kev also took the chance to refresh the photos of the foot bridge on a sunny day.  Modelling of this bridge will start soon. 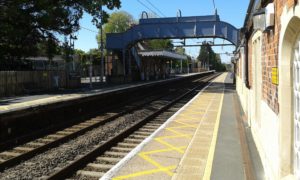 This is the first update on Ingatestone for a while.  This was due to us packing away at Christmas to clear the lower hall for our partner layout Putnam Yard to go to the London Festival of Model Railways at Ally Pally this year, followed by Copenhagen Fields being up in full for the club open day in April.   But we now are back up again until September (with a short interlude for Putnam at the end of July)

One of the important pieces of work is the installing of a touch screen and Raspberry Pi computer to run the JMRI software that allows us to control the points and routes through the fiddle yard.   The large touch screen will make operating the layout simpler for the “signalman” and we have had lots of help from Rob Stewart one of the co-leaders of the club’s Lacey Dale layout that makes extensive use of automation and computer control already.

For those who don’t know Raspberry Pi are a cheap (£30) but nonetheless fully functional computer, about the size of a credit card.  As a full computer it is able to run the popular open source JMRI program that allows full computer control of a DCC layout.  It can also be expanded by adding additional dedicated control boards on top, and we have purchased a Pi-SPROG that will allow us to run the panel control of the layout fully from this small footprint without having to use any other controllers or hardware.   Future expansions for this device could include wireless control of trains from Apple/Android phones.   Once we have more experience of the system and setup, a knowledge transfer day or lecture may be presented.

The other big decision was to rework the landscape as we now have the final shape and size of the scenic area built as baseboards we can now work in a much more methodical way in shaping our landscape and the cutting.  Having had a long chat with Mr Peter Mann leader of the 7mm group we tapped into his lifetime of experience as a civil engineer and committed modeller in 0 and 7 mm scales.  The biggest problem in landscape is compacting the size of it in some views you are looking at a 1/3 to 1/2 a mile which can not be modelled to scale in ten feet of baseboard. You also often struggle to see the true lay of the land as it may be overgrown with vegetation. 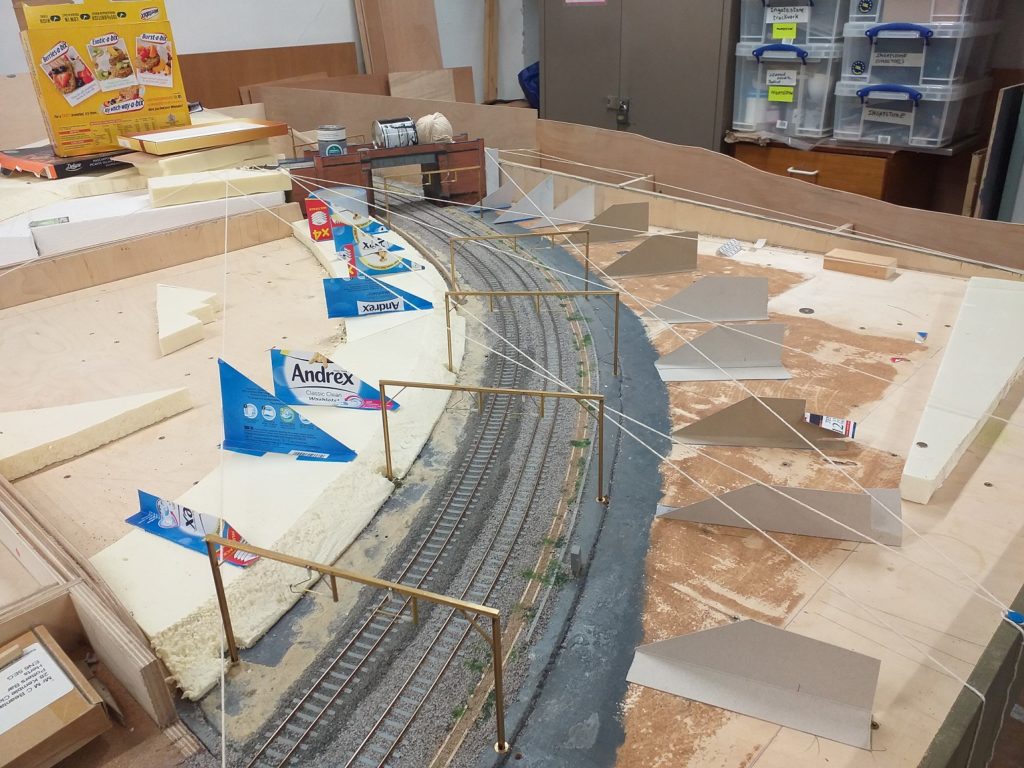 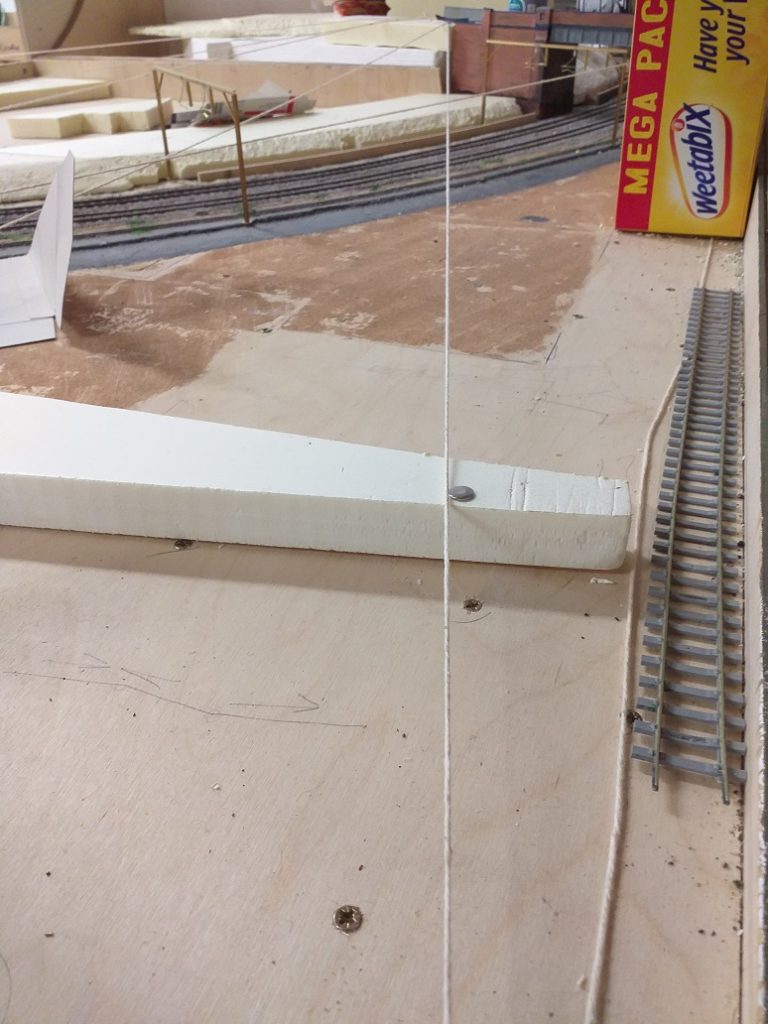 So we have adopted Peter’s suggestion of establishing the height and fall of land on the layout from a known high point. This is where all the strings come in (and not as noted by one member working out how President Kennedy was shot from the grassy knoll!).  The string is the fall of the land scape then using a ratio for the angel of the cutting we make the profiles which are cut to intersect with the fall of land or, more simply, where they touch the string. As Peter said the structure of soil is complex and may support a variety of angels of slope in a cutting, but so far this is looking like a more typical rolling Essex landscape as opposed to our more rugged first try.

We use a fire resistant foam block to form the base of landscape and although it is relatively expensive, it is robust and workable and suited to a layout that is moved around often. It will of course be covered with a layer of plaster and then the vegetation.

If your interested in talking to us about how and what we are doing, the team is often about on Thursdays and for the next few weeks Ingatestone will be running.  We are always open to people to help and become involved. 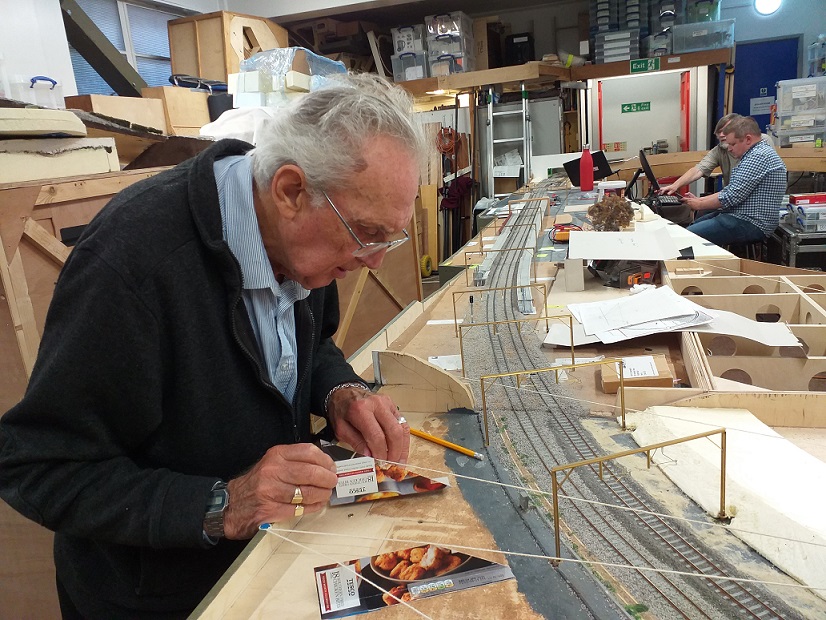