Freightliners were a regular feature on the section of railway I overlooked as a child, running down off the WCML through Primrose Hill and Camden Road. The Hornby model is clearly very dated: 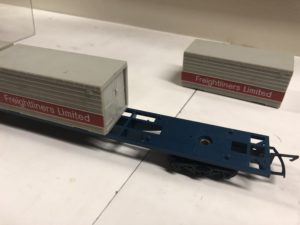 and I could never quite convince myself to buy the Colin Craig etched kits that I have jealously watched on other layouts, like Calcutta Sidings and Mostyn. Bachmann announced they were going to produce FFA/FGA and I placed the order with Model Junction in Slough and took advantage of their pre-order discount. Once they arrived they needed a bit of work to assemble and convert to EM.

The wheels as supplied are 11mm diameter on 25mm axles. They flanges look too deep to just pull out on the current axles. So I’ve used some DCC concepts 10.5mm wheels, which come on 26mm axles – you can see the differences in the first picture (also in the first picture is an AG axle just to see whether one might be easier than the other to change). 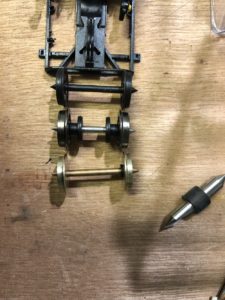 I tried to fit in a new axle without any adjustment, and you can see how far it deflected the sides of the bogie in this picture – so it needs some fettling. 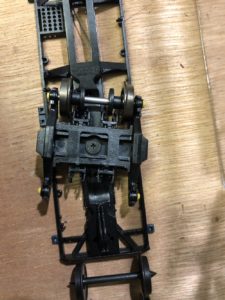 The axles come with the brake discs on them – and for this first one I’ve not bothered to put them on the new wheels just to see that it works mechanically. But in fact it’s the brake pads themselves that are a bit fiddly – they make it more difficult to open out the plastic bearing to get the extra length for the 26mm axles to run freely. I’ve used the Micro-Mark truck tuner to do the opening out – but with the rubber removed so it fits by the brake pads which makes it more difficult to turn. But it did the job, and then a couple of strokes with a small file on the inside of the axle boxes and the new wheels slot into place. 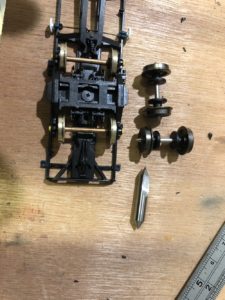 This version has a variation, using the AG wheels. In this case I’ve reused the original axles and put on the Gibson wheels. It means less work on the bogies sides. 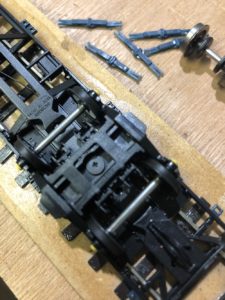 Both versions run freely on the test track. So yes it’s much easier than some other recent models, but does need some time and effort rather than a direct drop in.

Next up is mounting the splash guards and boxes. I’ve mixed them around a bit, with some gaps in both the splash plates and boxes, and the 30′ and 20′ slightly more random than supplied. The fiddly bit is putting the correct version of the tiny yellow twist locks in place. Both the twist locks, containers and splash plates are held in place with canopy glue, so it should be possible to move them around. 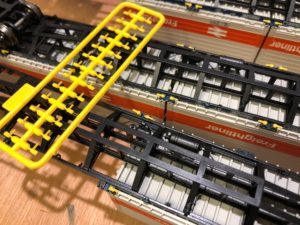 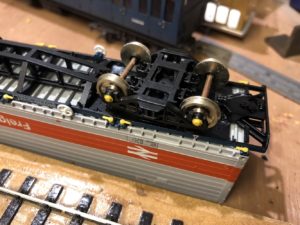 Next up, some renumbering and weathering.. 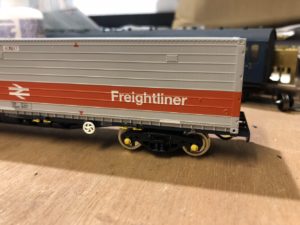 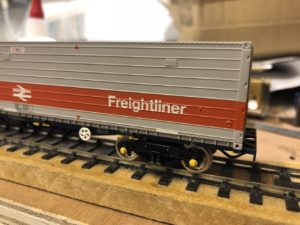