Chris Ibbotson has been busy bringing a Hornby Class 90 up to a better standard. This model was fair representation when first released many years ago but suffered from many of the issues that are a result of Hornby’s wish to produce a product that was both a toy and a model.  But this has been over come by many hours of work and the installing of DCC, with lights to come. 90 001 “Crown Point” will make a fine addition to our Intercity fleet of MK3 coaches in their  mix of liveries reflecting the moden age we live in of changing franchises and colour schemes but Chris has captured well the Abellio Greater Anglia house colours which are simple but striking. 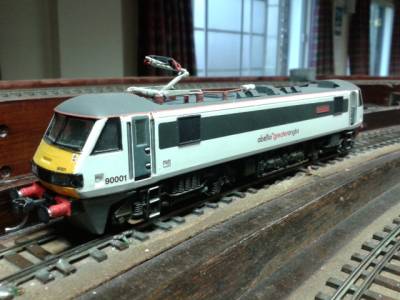 We will only go so far with this model as we await the release of Bachman’s  much up dated and fine detailed new model.

90 001 will be a star turn when we have Ingatestone  back up in full in September. We are also working to have the last major pieces of woodwork done that will expand and infill the landscape of the layout .

Our experience at the London Festival of railway Modelling at Alexandra Palace in March  was positive and proved the potential of Ingatestone to be an eye catching layout. We identified a whole batch of other things we need to address, including some reworking of the landscape and some improvements to make the OHLE robust on a mobile layout.

We continue meeting on Thursday Club evenings and on most Mondays, as there is still much to do – it’s a great time to get involved