Bow Junction’s turn to be erected in the Lower Hall started just after the May Open Day so it was erected near the start of June and was taken down and packed away on the middle of August to make room for Putnam. 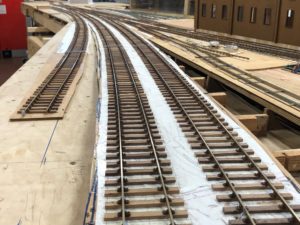 This was in fact the first time that all of Bow Junction was erected. It included two of the three fiddle yards. These two fiddle yards were constructed in my home workshop during the lockdowns. A third fiddle yard to accommodate traffic going towards Fenchurch Street still has to be built. The design of this fiddle yard may be different in order to take up a smaller space. Originally I had thought it might not be possible to erect all of Bow Junction in the Lower Hall at Keen House with fiddle yards at either end, but in fact it fitted in quite well, though next time we will move the whole layout  a bit closer to the entrance door, to make access to the cupboards at the far end easier.

Tasks to be Done

We had several tasks to complete while the layout was up, which could not be done without it being erected.

Most of this work has been completed over the summer. At both ends track has been laid between the visible part of the layout to the fiddle yard sector plates. This trackwork still has to be connected to the electrics. Because these connection follow reverse curves I think we may well add check rails to improve running. This is work that can be carried out with out the  layout being erected.

In several places repairs were carried out to the track, and test running carried out. It quickly became apparent that there were one or two minor electrical problems, which Chris Webber, Bow Junction’s electrical wizard, quickly resolved though we had to dismantle three boards to do this. 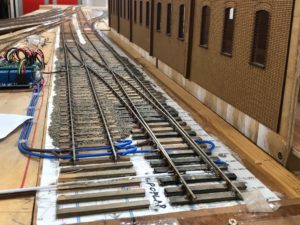 This enabled us to run a locomotive up and down the two main lines.

At the north end of the layout Bow Road crosses over the layout and a mock up of the bridge has been made. We have decided to angle Bow Road so we could disguise the point where the road met the back scene, so it was important to get the angle correct.

At the south end a footpath crosses the layout so two bridges are required . One over the line to the Docks and another over. the line to Fenchurch Street. Again mock ups were made.

On Thursday 18th August we dismantled Bow Junction and packed it in the storage boxes. I had thought this would be a long process but in fact it was quite quick. It all packed into its storage boxes and occupied a relatively small area of floor space considering the size of the layout.

Since the layout will not be erected again until the Exhibition next March. We are planning to work away from keen House and two boards have already been moved to my own workshop. I the last two  weeks I have fitted all the laser cut panels to the light machine shop (see header photo). 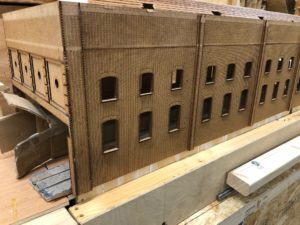 There is still a lot of work to do particularly in connection with constructing buildings and painting them. Also there is some building of rolling stock to carry out. Please contact me if you are interested in helping.