The representation of the KX Goods Yard has featured some magnificent (and large) warehouses, based on some of the buildings at KX, that Mike laser cut and made to produce a critical structural mass.  In fact, the warehouse had already been shortened at the front by a bay, before our MRJ photoshoot last February. 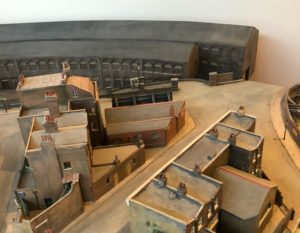 The problem is that these big buildings aren’t quite right for this part of the yard, as they should have a whole load of canopies and smaller structures at 90 degrees to them – the famous potato market.

We never claim 100% accuracy with CF, especially when we have to compromise on space grounds.  So over the last few weeks I kept thinking it was time to do something about this.  The warehouse was taken outside and a jig saw applied, lopping off the first floor on the nearer building over a few bays. 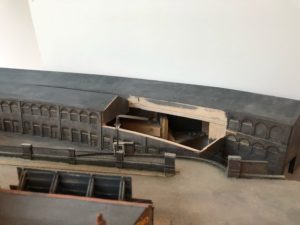 The front wall was reinstated as the wall at the back and a flat area filled in, ready to take four hipped roofs with a parapet in front. 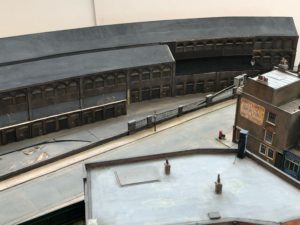 Canopies and the beginnings of the massed smaller roofs were still lacking. I therefore took a finer saw and Stanley knife to the ground floor area at the south (left hand) end of the building, with a view to moving it forwards to make the offices and ‘inside’ warehouses. Various styles of roof were sketched out with paper templates, but six pitched roofs should look about right; the shorter, long building will also get taken to the layout boundary (the overhanging bit visible in the picture was the sacrificed roof from the north end) 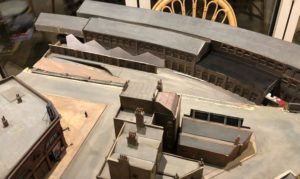 What can also be seen in this picture is that the south-facing ramp road has been removed. At the time we started sketching out this area we knew that there was an access road to the yard, but with the big warehouses hard up against York Way viaduct there wasn’t space to put it in correctly – so we turned it the other way round.  With the modifications to the warehouses, it became apparent that there would be space for a correctly orientated ramp. The pavement and railing wall were lifted and the ramp and retaining walls splintered off; fairly traumatically as it happens. 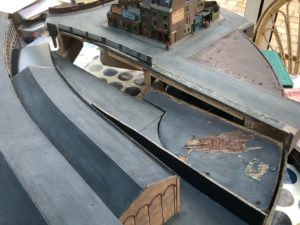 The structural integrity of the board was beginning to become compromised at this point, so some remedial blocking and gluing was needed to reinforce the nodes where quite a lot of stresses accumulate (the tube station is removed in these images). 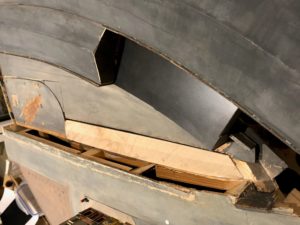 The current status has all the reinforcements and the footings in place for the new retaining wall. The new ramp road is now modelled at the far south end, with the gates to be closed: It was originally an access route for some cattle pens, although these were long gone by our time period. 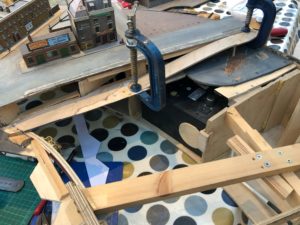 The solid potato warehouses will be supplemented by open awnings which will butt hard up to the retaining wall and the railed fence will be moved south next to the new ramp. The north end will feature a wall which should be good for some advertising hoardings and a bit of colour.  This little patch should all end up being that bit more convincing.
Whilst this whole area will look quite different when complete, is this butchery fine scale modelling? It is certainly in the best traditions of CF.