The Class 419 Motor Luggage Van was once a familiar sight on southern region boat trains at Platforms 1 and 2 at Victoria station. Here Chris outlines the prototype history and how he’s constructed the Replica kit in its later striking Royal Mail red livery.

In the decades before the advent of the Channel Tunnel, cross channel ferry travel was the only affordable and practical way for most travellers to reach the continent from southern England. These travellers took with them a hefty amount of luggage, which along with the flow of mail to and from the continent, had to be delivered ship side at Dover and Folkestone. The quayside lines were non-electrified, for safety and practical reasons. The newly introduced 4-CEP units had limited luggage space and could not run away from the third rail, so to  accommodate the traffic, British Railways ordered a fleet of ten 64 foot 6 inch long Motor Luggage Vans to be built at Eastleigh works on underframes laid down at Ashford works. These were to diagram number 498 and were fitted with a Vacuum Exhauster to allow a trailing load of vans to be hauled.

An initial batch of two vehicles under lot 30458 were delivered in late April and early May 1959. Numbered S68001 and S68002, these are classified as Phase 1 units, with slight differences from the later delivered units mainly around the secondman’s side Electro Pneumatic conduit. The Motor Luggage Vans were fitted with one Mk3 motor bogies which held two 250hp EE traction motors that could work from either the conventional 750v DC third rail supply or using the onboard 200v battery for low speed quayside working. Standard 1957 design control gear was fitted. From Christmas 1960 until March 1961 the Phase 2 deliveries were made, numbered from S68003 to  68010. Air whistles were carried above the driver’s front window from new, which gave way to standard air horns in later life. All MLVs were delivered in all over BR MU green livery with vehicle numbers on the sides, but no unit numbers carried on the front.

In 1964, when the first MLVs were being overhauled, yellow warning panels were added to the lower cab front to some units, and some also received unit numbers. In early spring 1967, MLV S68004 was repainted into the current rail blue livery with full yellow end. Repaints followed for all the other units, but they were painted directly in Rail Blue and grey from green, the last repaint from green being completed in July 1970, with 68004 receiving the grey band in August. Livery stayed the same until 1986 when eight MLVs (S68001, S68003, S68005/6/7/8/9/10) received the then-current London & South East region ‘Jaffa Cake’ colours of chocolate and light brown with an orange separating stripe. A downturn in the need for Channel port luggage traffic meant redeployment on mail traffic on the Southern Region, with 68001 and 68004 being painted into Royal Mail Red colours in December 1988. This livery was short lived, due to 68004 being held up by an armed gang at Merstham in 1989, with the two red units receiving Network SouthEast livery soon afterwards, along with 68008.

From the start of the summer 1990 timetable, most boat train services ceased, along with internal mail services on the Southern Region. This led to the rundown of the MLV fleet, with a batch of five units being stored at Ramsgate depot. In 1991 units were progressively stored as no work was available for them, until September 1991, when the last unit was taken from traffic. This was not the end of the line for some units as they were then used as depot pilots and numbered 931090-931099, although some did not carry a painted number as they were either not used, stripped for spares or just escaped being renumbered! The surviving units were rounded up at both Strawberry Hill and Bournemouth EMU depots for disposal, with sales to preserved lines around England.

Although Bachmann has now produced a RTR version, this article considers the kit released before that was announced by Replica Railways. In a similar manner to the launch of the RES owned former Class 307 PCV vehicles a number of years ago, Replica Railways effectively made a ‘soft’ launch of the MLV, with most of the components being new releases or existing components from their range (the 64 foot underframe). What you purchase is a kit of parts, with some thought having gone into the production of parts such as the one-piece bodyshell. This has been injection moulded in the same light green as the MLV cab interior to remove the need to paint the interior! The moulding is of accurate proportioning and dimensions, looking like the prototype units. The quality of the mouldings is reasonably high, with details such as the battery compartment and the underframe detail being particularly well carried out. The only work needed was some simple cleaning up of flash around the cantrail guttering and a slight outward lip around the buffing plate area of the cab fronts that required fettling to give the correct shape.

To enhance the model, a range of additional details parts were added, being either scratchbuilt (the handrails and grabs), or purchased from various manufacturers, such as MJTs EP jumper pipes, buffing plates, coach buffers and air horns, with DC kits cosmetic bogie side- frame mouldings mounted on a Black Beetle 8’6˝ unit for the motor bogie. A Bill Bedford sprung bogie frame and pick-ups were used for the non-powered trailing bogie. The injection moulded underframe components were attached using Butanone solvent with Replica providing a diagram showing the location of the various elements. 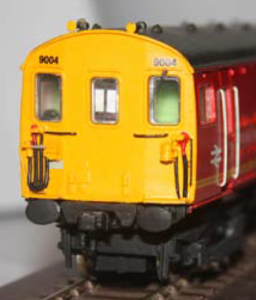 Finishing off the model is pretty straightforward, with a light coat of primer followed by airbrushed top coats of Royal Mail red on the bodysides and solebar, Falcon grey on the roof (from Railmatch) and Warning Panel yellow (from Phoenix Precision).

Fox Transfers pack F4251 was used for the duplex lining and small Royal Mail lettering and ciphers, with a coat of Satin varnish and light weathering to  round off.

Since making this model, Replica has produced its own powered chassis, which makes this kit even easier to build (if you want a powered version – it could of course be an unpowered “dummy” coupled to another power EMU from the growing range incluidng the Bachmann CEP and forthcoming BEP four-car units.