In the late 1980s, the success of the Network SouthEast sector, led by Chris Green, brought about an upsurge in the number of commuters on the railways. On the former Southern Region third rail lines into London, four car Class 455 EMUs had been plying the rails since 1982.

Operations were normally conducted with 8 car units in the peak times, with 4 car units running off peak. A replacement for the life expired Class 416 2-EPB units and provision of some flexibility to cope with the upsurge was needed and to accomplish this, a fleet of 24 two car units were ordered from BREL, to be constructed at York works. The design was essentially the same as the Class 320, 321 and 322 units that were already in production or had already been delivered. The decision was made to fit standard SR style Electro-Pneumatic control and jumpers on the cab front. Some commentators at the time felt that it detracted from the look of the front end, however the practicalities of operating with the existing Class 455 units was paramount. A link with the past was the use of the EE507 traction motor used on previous generations
of EMU coupled to a modern traction control system using GTO Thyristors as used on the recent (1987/8) Class 319 Thameslink units. Delivery from York to Strawberry Hill depot was usually accomplished with one or two units being sandwiched between translator vehicles to allow locomotive haulage.

Units were finished in the standard NSE ‘toothpaste’ livery. After delivery and commissioning was started, trial running was undertaken which showed up some problems. The main concern was the location of the Driver’s seat in the cab which was felt to impede viewing of the CCTV monitors on platforms used for One Man Operation (OMO) of the services. Units were stored in the yard at Clapham Junction and sidings near Battersea power station pending modifications that were undertaken at Fratton depot in Portsmouth. The units eventually settled down into service on the South London Lines from Victoria, Charing Cross & London Bridge to places such as Caterham, Croydon, Dorking & Wimbledon. By 2006, the units were looking very tired and Southern decided to put the units through a repair programme. An internal ‘refreshment’ programme was undertaken at Selhurst depot, followed shortly after by a C6 overhaul, with corrosion repairs, door reliability modifications, CCTV fitment and a repaint at Wolverton works into the current Southern livery of Malachite green, Ivory grey, Traffic white and Olive green. A recent modification made at Selhurst depot has also seen some units lose their toilet facility (although keeping the small window!) and gain a disabled seating area. 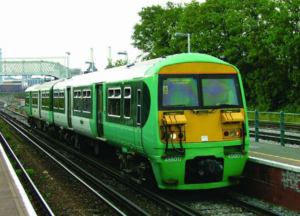 The Model
Following the standard Bratchell format of ABS kit parts, this is primarily a ‘kit-bash’ because to control costs, the Class 321 style front moulding has had to be used. To reflect the exposed headlight design of the 456, this needs modifying with the Wipac style headlight mountings to be fitted in a slightly recessed position. For this, I used Shawplan whitemetal castings drilled to accept Miniatronics 1.5v grain of rice light bulbs for working head and tail lights. After this was completed, attention turned to the EP jumpers and receptacles. Ex-MJT parts were modified and cut-down to give a good representation. To provide the cosmetic coverplate over the EP equipment, some 0.3mm brass  sheet was bent and glued over blocks of Evergreen styrene strip. Turning to the roof, the toilet tank hatch was fabricated from thin Evergreen strip let into a slot cut into the roof ribs. Underframe equipment supplied with the kit is sparse, mainly consisting of the air suspension surge tanks and brake control boxes. To supplement this I used a mix of some former MTK detail parts that were tidied up and scratchbuilt other parts such as the toilet retention tank. Bogies are again a hybrid, such as the Bratchell sideframes for the P7 motor bogie mounted on a Black Beetle motor unit. 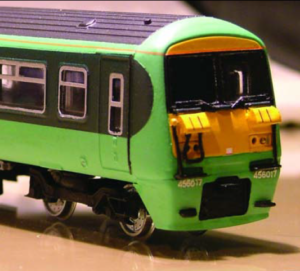 Painting such a complex livery as Southern is relatively easy, Phoenix  Precision paints being used, starting with traffic white as a neutral base, ivory grey solebar band, malachite green and then the olive green being applied. Plenty of masking is needed, however for the cab end curves, the inside of a roll of Tamiya masking tape provided the correct radius. All that is now needed to complete the model is a set of Southern logos for the middle of each car, which are not currently available from any source. 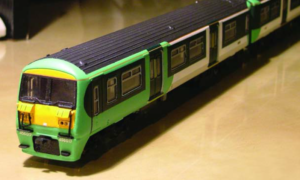 (All photography by the author)