Some members may remember me bringing along my O gauge Bulleid Light Pacific (34019 ‘Bideford’) into the Club some months ago and running it on the test tracks. She is the pride of my fleet, being built from a Martin Finney kit by notable loco builder John Edwards and painted by Ian Rathbone a few years ago. She was later converted to DCC and has a sound chip fitted. So all in all, a real ‘top link’ loco. The reason for bringing ‘Bideford’ into the Club was she was such a suitable loco to pull my brand new three car set of Bulleid corridor coaches. Once again I had put my hand in my pocket and had them built for me by CRT, who make etched kits for them. The overall order took nearly a year, but they were well worth waiting for and look superb.

But on that night at the Club I soon realised I had a problem. The coaches were very well detailed, with brake and steam pipes sitting closely to the screw link coupling, just beneath the corridor connection. And that was the problem. Despite having a suitable coupling pole I just couldn’t connect the couplings. I fiddled, I changed sides, I tried linking the opposite coupling, I cussed, I tried again and with sweat dripping from my brow our dear Chairman came over to see if he could help. Leslie fiddled, change sides, tried linking the opposite coupling, cussed, and tried again…but eventually, after about 20 minutes, he succeeded (thanks Leslie!).

So eventually the loco was able to pull the three coaches, with some Southern vans at the rear, and very nice it looked to. Once home I started thinking I needed to resolve the coupling problem. ‘Bideford’ already had a hook on her tender (so that 3-link or screw link couplings could couple up) but she also was fitted with a Kadee automatic coupling used on the few brief runs she undertook on Happisburgh (yes, a few‘West Country’Pacifics were used briefly in East Anglia!). Fitting Kadee couplings to the new coaches seemed the obvious answer, but it wouldn’t be a simple task as bogie vehicles need to have them fitted to the bogie, not the buffer beam (although some RTR O gauge suppliers do this, but you need very large radius curves on which to run them). Many years ago MRC member Mike Pugh had fitted some Kadee couplings to some of my stock in exchange for me painting and weathering a rake of horse boxes Mike had constructed. I contacted Mike to see if he could help once again with my new coaches. Despite initial reluctance he agreed to take a look at the problem. Mike takes up the rest of the story….

Dave Coasby wanted his ‘0’-Gauge Bullied 3-car set fitted with Kadee couplings at the ‘Happisburgh standard’ height. That is actually the US 1:48 height for On3 stock and a Kadee height gauge – appropriately assembled – will gauge that. I’ve used mine for all the stock I ever built for H’boro. The reason DC wanted that installation is that it took 10 minutes per coach-pair to connect the screw-link couplings with which the set arrived; also his matching Pacific has a Kadee coupling at that height. Kadees just bang together. I volunteered to have a look at them and collected them at ALSRM Reading, together with a Slaters ‘Van B’which had been Kadee-fitted by the late Peter Elmslie. Typical of his work, that installation was elegantly simple and I copied its style; no matter that the van had aWayOh bogie with compensation and that the CRT coaches have rigid Roxey bogies. The latter use a standard etch for 8-foot wheelbase, with white-metal castings for the sides. A piece of ½-inch by 1/16-inch brass would fit under the top plate of the standard etch at the right height. 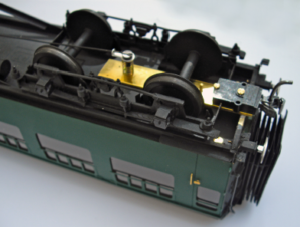 Actually I forgot to allow for the ‘pull-out’of Kadee’s under tension; could have set them a millimetre closer each side. On the other hand, the corridor connections are already using/pretensioning some of that distance when the set is at rest. As supplied, the brake pull-rods had been soldered to the bogie pivot screws and I had to un-solder them. I wanted the installation to be easily reversible so I used some solder tags. Those are placed on the pivot screws, above the washer thatc ontains the spring (although the washer is no longer really needed) with the brake rod threaded through the turned-up end. The screw is lined up with the coach centre-line, when the spring is sufficiently compressed; the solder-tag is then moved around such that the end of the rod (bent slightly downwards (this and the previous comment, depends on the viewpoint of the coach being upside-down at the time) acts as a rotation-preventer by lying in the screw slot.

The brake and steam pipes had to be removed so that the coupling could swing very closely under the buffer-beam but the extra visual clutter of the Kadee head means that their lack is not easily noticed within the set. The outer ends had plain coupling hooks installed so that non-Kadee-fitted motive power or stock may be three/screw-link connected above the end couplings. 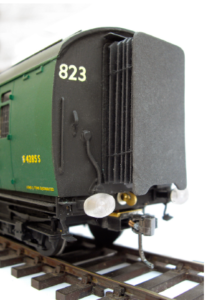 Total materials? Half a dozen sets of: three inches of brass strip and three 10BA screws. Real cost?  Several blunt drills, which then snapped and a couple of 35-year-old taps ditto.

I hadn’t done any real ‘0’-gauge modelling for three years or more, for a variety of reasons, so I was very glad to be forced back into doing some once more.

This article first appeared in Bulletin 487. An archive of recent Bulletins is available online in the members’ area of the website.