It is not often that news about a model railway spills from the pages and forums of the modelling press onto the pages and screens of the national press but Heaton Lodge, a 7 mm scale layout based upon a section of line in West Yorkshire has done just that. We sent our West Yorkshire resident member Stephen Foster to report:

Advertised as being the largest model railway in the UK and coming in at 180 ft long with 160 ft of line fully modelled it provides the viewer with an impressive view of a railway that few layouts can provide. It is based upon a section of the line to the west of Mirfield where the ex L and Y Calder Valley Line and the ex LNWR Leeds to Huddersfield lines converge. The layout is set between 1982 to 1985, a time when Simon George, layout builder and owner was active in that area train spotting. The model has the burrowing junction that was put into operation in 1970 which replaced the existing flat crossing.

There is a whole raft of statistics that can be reeled off in terms of the amount of wire used, ballast laid down, litres of glue used etc made even more impressive that this is the work of one man Simon George, who around eight years ago set out to recreate the section of line that he spent time at spotting numbers and observing the railway in action. He concentrated on the scenic, track and stock aspects and he had the assistance of a small but talented team of experts in their own fields who created a functionable and practical layout. The end result is a layout that can with stand the rigours of day in and day out running. True to say that there have been a few issues in this its first shake down exhibition but nothing that has brought the layout to a halt and the hand of god that cannot quickly clear. 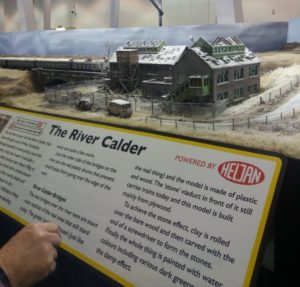 I visited the layout a few days ago after booking my e ticket on line and was efficiently processed at the entrance. I joined the end of the line of people who were slowly working their way down the length of the visible section of the layout, and it is at this point that the enormity of the piece strikes you. The lines stretch away into the distance and at the top end you can just make out the cab ends of a couple of locos standing at a signal gantry. Your view is then distracted by the appearance of a train running in from the curve behind you and drawing to a halt checked by a red signal light that protects the junction ahead. Looking back up the line what seems to be a OO scale engine is starting to appear coming towards you and as it gets closer the whole size of the O gauge train becomes apparent.  The ruling gradient of 1 in 137 which means there is a rise of 12 inches helps created the illusion. The length of the layout replicates the view of the real railway and the appearance of a train in the distance something which I had not experienced on a model railway before. 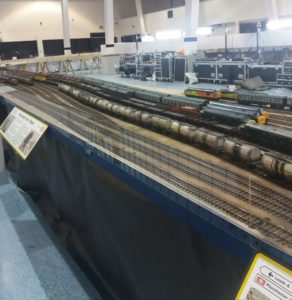 Progress was slow down the layout as the whole length was occupied by other visitors but at each board there is something that catches the eye and deserving of attention. Simon has selected winter time as the season and with the techniques he has used to recreate the ground cover it does portray the cold and bleakness of the scrub land that lines the track.  Trees are well observed and constructed and nice touches of accumulations of leaves around the trees and the hedges are replicated.

By the time you have taken in that section of the line and the well positioned and informative display panels another train has caught your attention. There are 27 trains that orbit the layout covering the main types of engine and traffic that the line served when Simon was taking numbers. Here the mass of the Heljan 7mm scale models come into their own, all fitted with bespoke sound systems running at realistic speeds, accelerating and deaccelerating for signal checks. All stock is weathered appropriately, and train lengths match the prototype. A Class 56 on a train of thirty two loaded MGR wagons comes into view and pulls slowly to a signal check for it to clear before it comes to a stop and the engine note changes as the power is applied to accelerate the train forward. The Deltics are of course one of the favourite types and their engine note lingers down the length of the line as it roars along. For steam enthusiasts there are examples to be seen. Evening Star was on duty on my visit. Thomas makes an appearance and is well received by the younger viewers.

Throughout the layout there are cameos that catch the eye and help focus attention of the smaller pieces of rail infrastructure that might otherwise be missed. The collapsing mill and sewerage farm occupied the attention of many of the visitors. The standard of modelling is consistent, and I was not able to spot any piece that did not match in terms of quality of appearance. A friend who was visiting at the same time and had spent time taking pictures at the location observed that the structures seen were correct in detail. 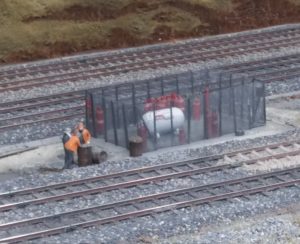 After traversing the scenic section, it becomes plain that there is more to come and indeed the next information panel shows that in Phase 2 there will be a station complex added. This will be of not a particular station but incorporate features of a typical station that can be found on the line. The base boards are already widened to take the structures and more lines. To the rear of layout another board indicates that there will be more trackwork to create a marshalling yard for Phase 3 which looks as if it will link the two existing fiddle yards into a complex. 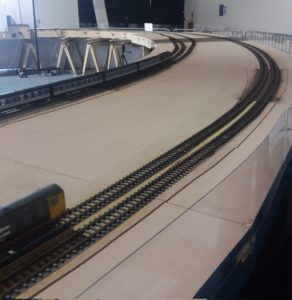 Covid restrictions, and this being the first of what he hopes will be a number of exhibitions around the country, limited what other elements could be brought to this venue. There is a self-supporting stand from Heljan and Peco and Rails of Sheffield at the weekends have been bringing a pop up shop. Simon George has indicated that he sees the future exhibition model being one where Heaton Lodge is supported by other layouts and trade stands as well as supplying catering facilities.

Was it worth the £5 entrance fee? The answer has to be yes just to be able to see one man’s dream come into fruition. The standard of work and running is as high as any exhibition layout I have viewed, and I look forward to the future developments.

Any one wanting to read more about the layout there is an extensive thread on RMweb – Heaton Lodge and I would recommend anyone to visit the site for further details.

The layout is on view until December 17th. 9.30 am to 5 pm. Market Hall, Union Street Wakefield. WF1 3AE. It is around 800 metres from Wakefield Westgate Station. Although there are no catering facilities the nearby Trinity Walk Shopping Centre supplies a wide range of coffee and eatery places.