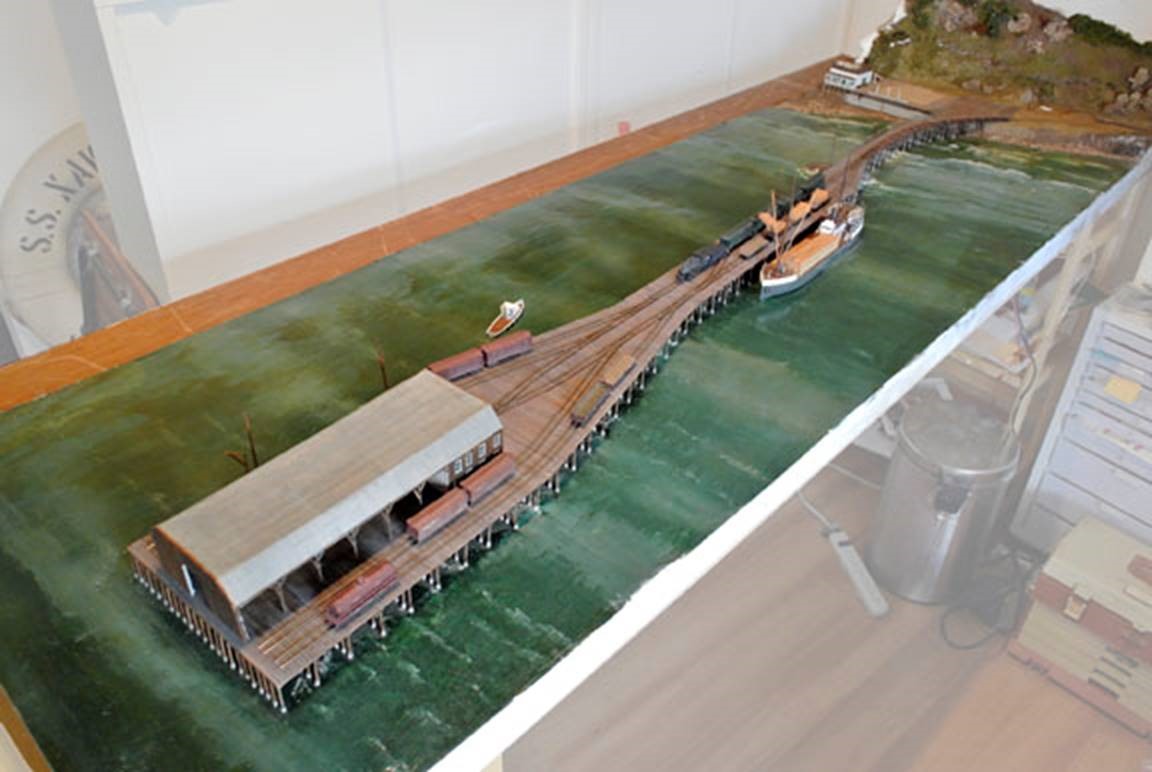 On a MUCH smaller scale (Nn3) I have been binge-building here in Hawaii. Or, rather “re-building” a diorama built on a 6’8” x 2’-8” door in the late 1980’s by the late Ken Westcott and architect Andrew Merriam for the San Luis Obispo Historical Museum. It was a static diorama of the 1890’s wharf in San Luis Bay as it appeared in the 1920’s. As the last custodian of this diorama – The San Luis Obispo Railroad Museum ( https://slorrm.com/ ) – now has a well-done HO scale version of this scene, they gave this diorama to me a couple of years ago. This diorama will be the anchor section of a sectional layout I am building in the spare bedroom of our new home here in Paradise.

The wharf was served by the narrow-gauge Pacific Coast Railway, and Ken and Andrew used Nelson Gray Nn3 rolling stock and a white-metal static locomotive from Gold Rush models for equipment, and strip styrene for the rails. The backscene was a well-done painting of the cliffs behind the harbor. I removed the backscene when I shipped the diorama to Hawaii in December, and will create a new 3D representation of the cliffs so I can include a model of the lighthouse I built in the 1970’s on the top of the cliff.

Since we have been staying home under island-wide stay-at-home orders, I have re-laid all the track with Code 40 rail spiked down to the wood decking. (with some “staged” Nn3 equipment for now in the photo).  I built the turnouts using Fast Tracks jigs. The switch machines will be Czech-made MTB switch machines purchased from Model Railroad Control Systems (http://www.modelrailroadcontrolsystems.com/). I have only installed and tested the operation of one of these on the wharf so far in developing a way to throw the points from below the water line. Now that I have worked that out, I have seven more to install, then the controls recessed into the edge of the door (which will eventually be painted black.).

If you’d like to join The MRC or give membership as a gift, and find out more about projects like this and have access to our archive, click here for our special Lockdown offer of just £20 for the rest of 2020