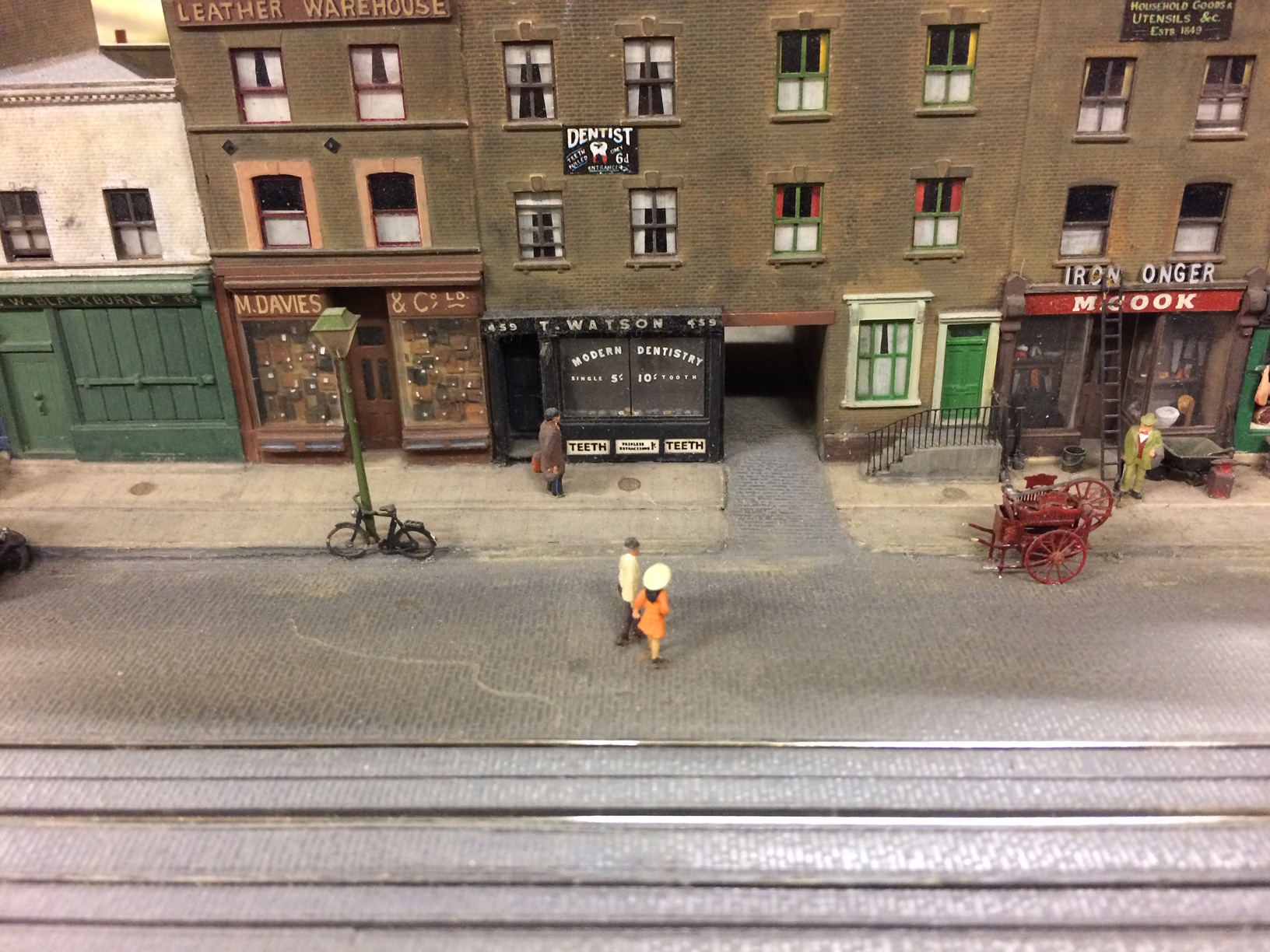 This article was first published in Bulletin 423 – available to download in the members’ section of the website.

The observant amongst you will have noticed that there are many shops, factories and vehicles on Copenhagen Fields, some of which carry names. Quite a few of you will realise that many of these names have connections with Club members or people who have contributed significantly to the model over its 21 year history. One might say that they have been immortalised. What follows is a list of some of these, concentrating on the older end of the layout for this first article.

Mercers’s Mangles – named after a young member of the Club, who was around in the early nineties, whose models bore some resemblance to the name of his factory. Clark’s Machine Tools – Dr Peter Clark contributed the award-winning track mangle that rolls the brass strip fiddle yard track to the correct radius. He also made  many other items of layout hardware from his engineering workshop. Without this tough hidden track and the heavily engineered baseboard joiners, the layout would probably not have survived the number of shows and van rides that it has. There is
nothing more annoying than having to repair or rebuild items that are damaged on an exhibition layout.

Mallet Porter & Dowd – This building actually exists with this name and was originally a second hand clothes seller of surplus uniforms from the Crimean War. We do have a David Mallot in the group who made the beautiful name board for the layout front and a couple of buildings, one of which was put through the band-saw to make it fit the site (he never realised we did this). David emigrated to Germany and has helped us at shows over there.

Brownlee the Butchers – The late Dennis Brownlee was not over enthralled at being named after a butcher: he thought we were casting dispersions on his model making. This was far from the case, however, when one considers how many miles have been clocked up by the tram and the Flying Scotsman.

M Cook – Iron onger – The shop name has been waiting for the ‘m’ for the last 15 years. Martin Cook (not Mike Cook, the York exhibition manager, who has always been flattered by having his name on our layout) was a member from a young age in the early 80’s and worked on Chiltern Green and Copenhagen Fields. We used him to dynamically stress-test a prototype of our
box beam construction method: his nickname was ‘Bulk’. He was a BR signal engineer and undertook an incredibly useful photo survey of the Kings Cross goods yard before the weeds and Union Railways took over.

T Watson Modern Dentistry – Need I say more: the nearest I have ever got to own-ing a dental practice. M Davies Leather Warehouse – Mike was an early member of the group who made the tunnel mouth at the North end of Copenhagen Tunnel: he always wore a leather jacket, hence the shop. W Blackburn – Bill is the current  Chairman of the 2mm Scale Association and has been responsible for the track systems (etched chair plates etc) used on the layout. In the early 80’s he actually made a machine to cut the grooves into the bullhead rail that we used. At the time, our track set new standards for 2mm modelling.  Samsons Fishmonger – This is the grandmother of Matthew Wald who has made many of the shops on the layout. Matthew is our chief shop and wagon maker, even though he has been living in Cornwall for the last 17 years.

Alexander’s Bakery horse delivery van & Ashley Trojan van are named after my sons (they were very small / non existent when the layout was started). My daughter had a coal dray with her EVW initials on it, but the sign got knocked off. Better do something about that…

B&H Phillips is a lorry delivering machine tools. This is the Australian branch of the layout: Brian made many of the details up Market Road and within the Cally Market itself, when he was over in
the UK a few years ago. Vier Pusey & Holth, ‘Imperial Works’ is where the machines are being delivered to. This factory was named after a group of Imperial S gauge modellers. The first named makes everything out of wood and has a brother called Percy, the second is a vicar who married at least a couple of Club members and the last, a solicitor, made the beautiful White Horse public house for the layout before emigrating to New Zealand. We were considering calling the layout ‘The Vale of the White Horse’ but another group beat us to it. This building and the late Tom Clark’s Baptist Chapel (sometimes confused with a Metropolitan Water Board Pumping Station) set the standard for the rest of the layout.

MT Randall is the Joiners & Timber Yard: for obvious reasons…. JB Smith was the architect who drew up the layout on the back of a Spaghetti House napkin in 1983. John continues to outsource work from Frome, Somerset, where he now lives and is producing a fantastic model of Totnes Station ~ you may have seen his Ashburton terminus in N gauge at Keen House meetings and our Exhibition. The last building that John painted for us was Mark Fielder’s Meat Market Tower. It is well worth a close look. J Greenwood Café – John is a well known 2mm modeller, who owned a café at the time this model was made. John made some of the signals on the layout and the J50 that shunts Mrs Wilberforce’s Yard. Some of you may have seen his mind-boggling working 2mm scale articulated lorry and gantry crane on his Wenford Bridge layout.

S Hine Cobbler – The play on words in the name says it all, but of course Stewart has contributed a vast amount to 2mm Scale modelling since the formation of the Association over 40 years ago. He produced the Caledonian Road underground and most importantly, but never praised highly enough, the Pentrollers, without which Copenhagen Fields would not work. Choosing the names for the layout has been great fun and is a small way of acknowledging the support of many people over the years.

The policy continues and I will cover some rather good choices at the southern end of the layout that are coming up for your delectation, when they are in place on the model.