York Road tube station is now nearing completion of the internal details.  This has certainly made it a far bigger job than originally intended! The use of modern technologies continues, with 3D printed sanitary ware – specially designed in Australia (by a 2mm SA member) printed in Croydon by Justin and fitted in St Albans. 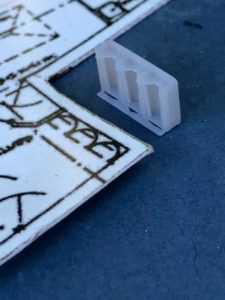 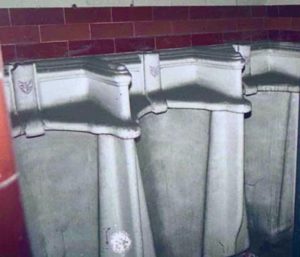 At some stage the plumbing was removed. 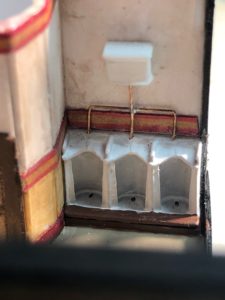 Someone is having a quiet read of their paper in the gents. 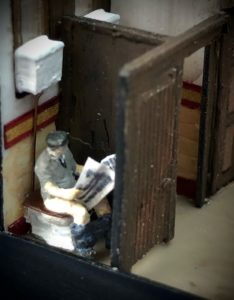 Whilst the ladies toilets are all empty.

I suspect that this may be the first time that anybody has been foolish enough to make a cutaway building such as this in 2mm scale.

The basement plant room now contains Richard W’s fan, which can be seen to be feeding up the ventilation duct in the corner of the building. The store-room is fairly scruffy and in the background the brass tubes will be the lift shaft and (latter day) ventilation shaft. I have a linear actuator to make the lift car work and a complete set of drawings for it. External details are mainly now needed on the rear roof, pavements and some foundations on the right hand end.

Next up is the ground floor roof. I tend to understate down pipes, using pre-coloured florists wire and painting in the pipe supports. It is so easy to end up over-scale with 2mm details. Having said that, I am very pleased with the toothed brick courses on the corner of the building. 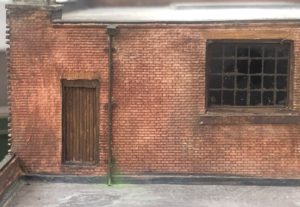 The ground floor flat roof had a couple of lantern roofs. These were made by scoring clear plastic with the back of a #15 scalpel blade with the dimensions dictated by the plan underneath. 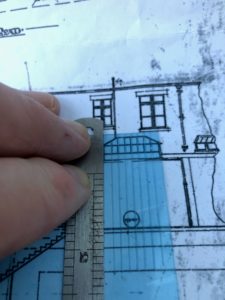 The lower halves were assembled, keeping the protective film in place to avoid glue marks (frankly, you have to be incredibly parsimonious with the Evostick contact adhesive anyway). The clean notch-shaped grooves made by the scalpel can be seen – they could be filled with paint, but I suspect these might have been a galvanised metal construction, so the natural colour is satisfactory. 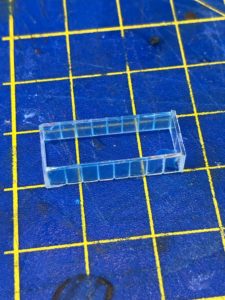 The vertical parts of the lantern had flashing strips of black styrene added; black so as not to show up white through the glazing. These were then glued into place and the top roof also glued into place. The final act was to flood the base area with thick matt varnish to seal the flashing to the roof and avoid unsightly gaps. The roof was painted with dried puddles and a significant amount of green weathering. 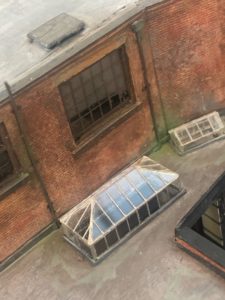 One thing that was evident and increasingly annoying was a dodgy brick joint in the first floor rear wall. Initially, the down pipe was placed prototypically, but then expedience took over and it was shifted to cover the joint. 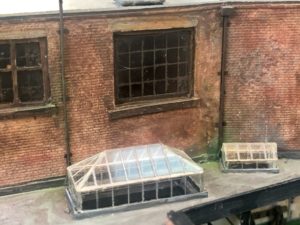 The rear view is now nearly complete.  There should be a safety handrail at the right hand end, but that can wait until the building is being handled rather less, as it would be quite vulnerable. The protective clear polycarbonate sheet for the sectioned rooms will soon be made and fixed, probably with blackened 12BA countersunk screws. 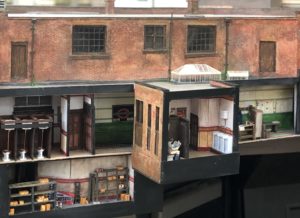