Although Young MRC meetings have had to be suspended, here’s an update from one of our regular attendees Ali and his dad Andy on some work they have had a chance to do at home.

One of the projects I have been working on during lockdown and beyond was to sort out all of the wagons Ali had built at Young MRC plus a couple of others bought as additional kits. Most had been built and painted within the standard Young MRC 2 hour sessions, and had seen service on Oakworth. A couple were started but unfinished and there were some bits from part started kits.

Just before lockdown Ali and I had a big sort out of the stuff – a number of the wagons had lost buffers etc and in general they were a bit of a sorry bunch, but I accepted the challenge from him to create a passable scale model rake from them. The basic rule was to use only the original kits parts or spares. With this in mind we established that there were parts or wagons to make up:

Plus another Dapol 16T Mineral Wagon body and some underframe parts but no floor. However, I had a spare Cattle Wagon floor so we decided that this could form another fitted 16T wagon. The existence of paintwork and some glue marks on the wagons lent themselves to being finished in the battered, rusted and weathered style that they were most commonly seen in, especially in the 1970s.

The wagons were all rebuilt and repaired as required including some Plasticard replacement parts for the Plywood Vent Van, couplings and wheels adjusted so that they ran properly, and then the existing patchwork paint finishes were overcoated with BR Bauxite for the fitted wagons (actually an old tin of Humbrol Rust Colour) and light grey for the unfitted ones, with black underframes. The fitted Mineral wagons had brake cylinders included underneath and brake pipes added at the ends from spare kit parts. The Meat Wagons would originally have been BR Crimson but by the 1970s it appears that most of the survivors were in Bauxite. The original kit transfers were used on the Meat Wagons, the Parkside & Ratio kits and one of the Mineral Wagons, whilst a sheet of Modelmasters decals bought off ebay allowed for the rest of the Mineral Wagons to have different numbers. The wagons were varnished with Johnson’s Kleer floor polish to seal them in (this is the old formula Johnson’s, apparently Pledge will do the same job now).

Next, the layers of weathering were built up – we wanted the wagons to very from weathered to extremely rusted and battered. A combination of matt black, grey and rust colour was built up on each wagon using dry brushing, wiping of still wet paint and stippling (dotting dark rust spots). Some weathering powders were used too. Finally Humbrol Matt Varnish was applied.

To photograph the train it was headed up by a BR Class 25/3 of the type that would often have headed this type of train in the 1970s/80s. As befits the scrapyard rescue nature of this train, the Class 25 is actually an MTK kit running on Triang motor bogies. With any luck this train will get a chance to have an outing at Young MRC when we are able to meet in person again.

Some photos of the finished train of wagons are attached – correctly formed so that the braked wagons form the fitted ‘head’ of the train in front of the loose unfitted ones. 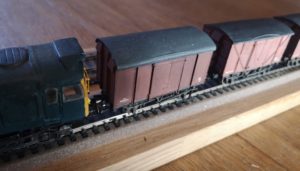 I hope this is of interest to other members!