In Bulletin 416, I outlined the plans for a small shunting EM gauge layout that we would try to build in a weekend. So did we do it?

The 21 and 22 February 2004 were the days chosen for the project. Despite a number of offers of assistance, I was slightly concerned on whether the offers would turn into actual help. I need not have worried, as not only did those who had offered turn up, but a handful of others arrived at various points over the weekend.

Peter Mann cut the wood for the baseboards in his workshop, and pre-assembled two of the boards to ensure that the glue had dried before we started to lay track. The third board was completed over the weekend. As a temporary measure, some trestles have been borrowed as legs until a longer term solution is agreed upon. 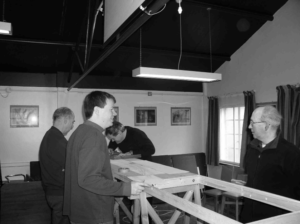 Richard Elwen took charge of laying the underlay, marking out the track on the boards and burying the uncoupling magnets in the underlay while others constructed the points with C&L components. More members started soldering up some of the tag strips and D connectors, whilst yet more were working on some wagon kits and re-wheeling some RTR stock. 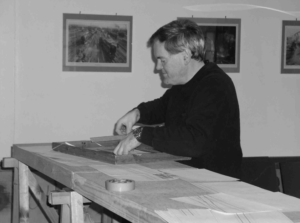 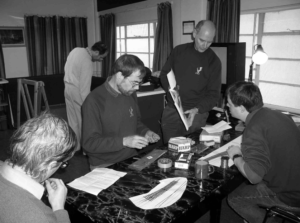 The first yard of track went down around lunchtime, and with some expertise from Mike Pugh the bulk of the track was down and ballasted during the afternoon. A trip to Pentonville Rubber at lunchtime yielded the foam which forms the slopes, and Hugh got to work with a knife and plaster. By the end of Saturday, the bones of the layout were in place. 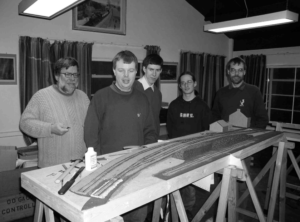 On the way out that evening, I popped my head into the Keengate room, and noticed that during the day a yard of handbuilt concrete track had been constructed, and a fair number of other things had moved forward which might explain where a number of people had disappeared to during the day…

On Sunday morning, the excess ballast was removed, and the rails and scenery across the board joints cut. Once the boards were apart, work started on cutting the recesses for the C&L track end protectors although work came to a stop whilst we tried to work out what to use to hold the etchings in place. We also found out that three rails were above the dowels, so the end protectors had to be modified to be fitted at an angle. They were actually fitted the following week, when we had established that they were designed for panel pins, rather than tiny screws.

Although there were as many people working hard, progress on Sunday seemed slower as the bits being done had less visual impact. The contours continued to be built up; numerous small adjustments to the track were made to improve the running; droppers were soldered to the rails; backscenes were cut and fixed on; the hills were given a coat of paint and some fibre stuck onto the glue to try to look like long grass. Finally, the droppers were twisted together underneath, and the first loco ran the length of the layout just after 5.30. 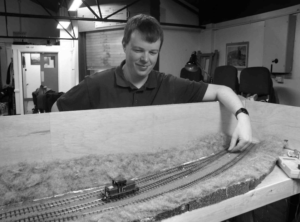 Although there was still lots to do, it seemed a good point to end the day whilst we were all in good spirits.

The layout then disappeared to my spare room to be wired up properly over two evenings. Apart from one point machine, it all worked first time. The point machine died between testing and installation, a red/brown and red/black wire had been transposed on a tag-strip and a proprietary 25-way jump lead only had 9 wires connected. Needless to say it took nearly as long to sort out that combination of faults as it did to wire the whole thing up.

I was then laid low by a cold for almost a week and little progress was made. Back on my feet, a selection of Woodland Scenics was gradually added and the layout went back to Keen House for a final bout of activity before the exhibition. Mike Tucker, who had measured up for some buildings over the weekend and took away some photos to work from came back four weeks later with the four impressive models – he must have worked hard to get them done in that time.

My wife and the Bevis-Smith family made a collection of trees from florists wire with bark made from a variety of builders gunk. They were planted after the back scene was painted just two days before LoFoRM.

The layout, legs and all the rest of the paraphernalia arrived at Alexandra Palace on the Friday afternoon in my Polo. Two trestles had to travel in the front passenger seat, but the longer term legs should be small enough to fit in the back to leave room for the second operator. It went up quickly as expected. A bit more scenic work from Carole and Leslie before we all got kicked out by security and the layout was looking pretty impressive.

I haven’t mentioned rolling stock up to now. In between layout building, about a dozen wagons have been re-wheeled and had MSE 3mm auto-couplings fitted. One Pannier has been re-wheeled, but time and parts for the rest ran out. So I was very grateful to Alan Monk and Steve Grantham of EMGS, DEMU and now the MRC when they offered to lend the layout some of their excellent green/blue era stock. It arrived on the Saturday morning and there was almost no time to try it before the public poured in. Their stock has three link couplings, and it didn’t take me or Hugh very long to remember why we planned on auto-couplings. However with practise we got better and the stock looked great. The class 20s didn’t like some of the track, and took some delicate controlling to keep them on the rails. It wasn’t helped by the usual fluctuations in temperature in the halls which caused some rails to move. I think we rose to the “challenge” of the limitations by the end of Saturday.

An extra early start on Sunday with the clocks going forward and some track to fix. The old cheat of sticking some card between the baseboard joins cured most of the track expansion problems, and some other remedial work was done with track pins and solder. Although not everything was perfect, Sunday was a much smoother day.

The show went much better than I feared, although there were some irritating problems to deal with. There were lots of questions – asking how the buildings were made, EM gauge, the greenery & track & the MRC. Hopefully a few will come along to the Modellers Day.

If you recall the original article, there were a number of criteria for the project:

I think all those have been achieved, although others are better placed to judge how well. There is still plenty more to do, hopefully before the Modellers Day later this month. The layout already has an exhibition invitation for next January, and we are on the look out for more.

In total over the weekend, 20 members came along and did some modelling, and since then roughly another ten have helped get the layout ready for LoFORM. There was a complete range of age, skills & interests and I think the more senior members of the Club were pleasantly amazed by the level of support. I am not only slightly amazed but enormously grateful for all of the assistance.

Exchange Sidings was the start of a series of finescale 4mm scale layouts in the Club – the same group are behind Minories, and it was the catalyst for Empire Mills and currently Orchard Wharf.