“Narrow Gorge” was my entry in the MRC’s 2015 layout challenge.

Although not my first layout, it is a first attempt at a number of techniques, including narrow gauge (all the kit-built stock is new for the layout), modelling cliffs and water, and trying to give depth in a very small footprint. It was also a bit of a rush, having previously decided (several times) that it would be a distraction from other projects.

Here’s the diary of how it was built over 18 days, mostly an hour or two later in the evening (with apologies for viewers on some mobile devices if photos keep rotating back) – with the picture at the top how it looked at the open day in December 2015

I fancied doing something different, and dug out an A1Models Bagnall kit I’ve had for a couple of years. It’s originally designed for OO9, but I thought I’d try 3′ gauge, so bought a Bullant 12mm gauge 3 axle unit at the same time as the kit, at the London Festival of Railway Modelling. (A1 models tend to visit some of the larger shows, and can be bought through the Dundas website) 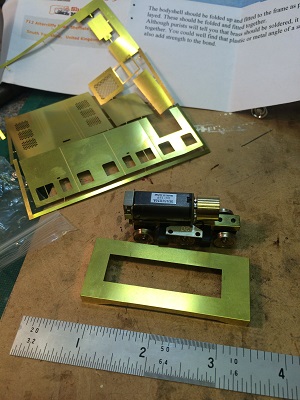 The kit is fairly basic – just the etched brass but after some scoring and folding and a bit of filling with solder it went together pretty quickly. The only tweak was having to cut away a bit more of the floor to allow for the longer motor unit. Now I have an engine, I need something to run it on. Perhaps a small demonstration layout… 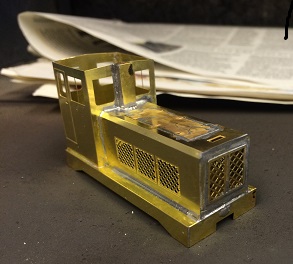 Ordered some items. One issue is that the 3′ gauge wagon kits at Parkside Dundas are listed as discontinued – It turns out that they can’t get wheels. But they are happy to sell the kits without wheels, and 3SMR sell suitable wheels for TT gauge. Orders placed. Tested the loco on the MRC’s test tracks.

A small package from 3SMR arrived with code 60 rail, sleepers and wheels, and I made a meter of track. Loco cleaned and primed. 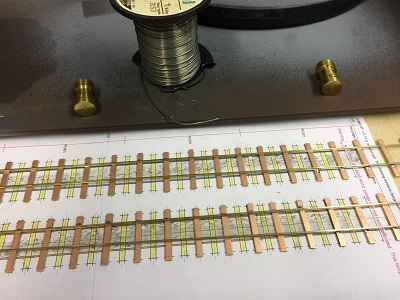 Collected some plywood and 2×1 to make a small baseboard.

Started a girder bridge, around which the demonstration layout can be built. It’s a couple of PECO N gauge girder ‘kit’. The assembly instructions are marvellous….By the end of the evening I had the central box section complete, and left it to set firm overnight. 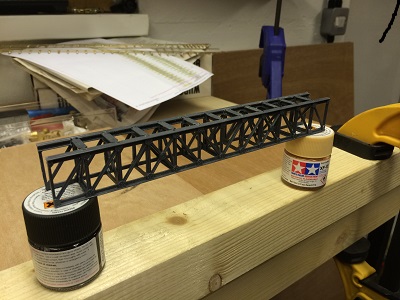 Continued with the girder bridge, adding the side walk supports using more of the PECO kit. Also built the track that sits on the bridge, with sleepers at the same spacings as the cross members of the bridge. This piece of track has check rails to help ensure no derailments. Loco painted with Halford’s Brunswick Green, three light coats. Came up with a working name for the layout whilst waiting for the Overground – “Narrow Gorge”. I’m sure the name must have been used before, but no sign on Google. 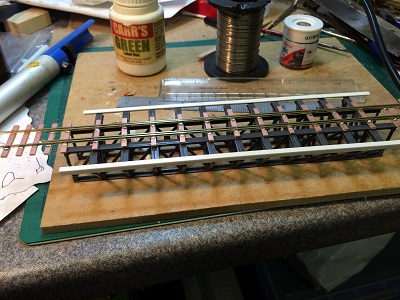 Finished construction of the bridge, with safety rails along the side. Glued and clamped softwood bracing to the 4×1 base of the layout, the base itself is allegedly 6mm plywood, but measures at nearer 5mm when checking for the overlap. Hopefully that makes it 17% lighter. 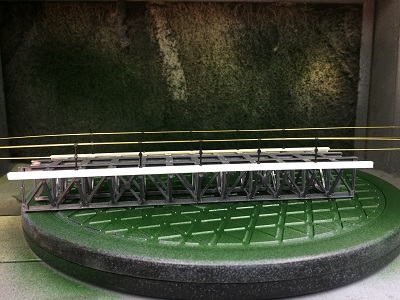 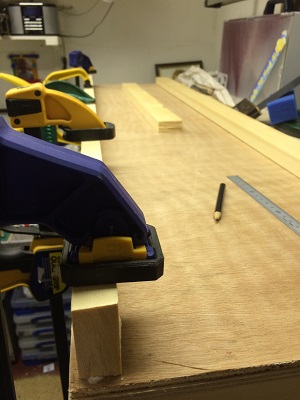 Continued with the baseboard construction, cutting out holes in the front and the back ply sheets for the ‘view’ and access, and bracing the plywood with softwood to keep the slightly warping plywood flat and to provide better joints. 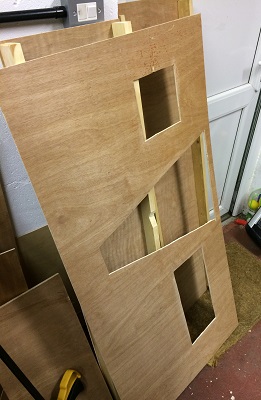 After an evening at Keen House, assembled the front and back onto the base, clamped and glued and left to dry after checking its square. It’s looking like a baseboard now, even if slightly unconventional in shape and size. But getting an idea of the limits of the perspective. Started to cut the foam that is the base of the scenery into blocks and profile. 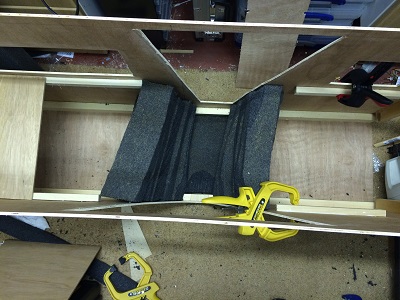 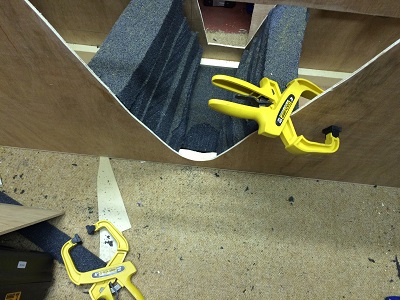 Glued the first levels of foam in place

Installed the internal shelves to hold the track base and controller, and the trackbed itself. Constructed the tunnel walls from Balsa. 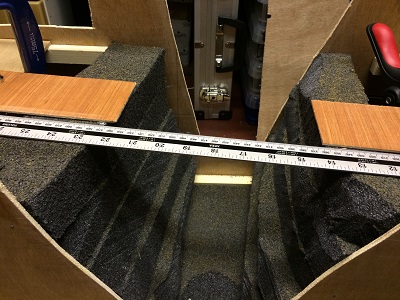 Installed tunnel portals onto trackbed, and finished cutting and gluing the foam structure up to the top of the layout. Left to set overnight. 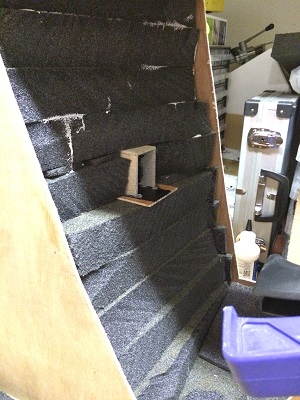 Applied plaster of paris to the foam, mixed in with some acrylic umber paint to ensure any chips later aren’t bright white. I’d forgotten quite how fast it hardens. 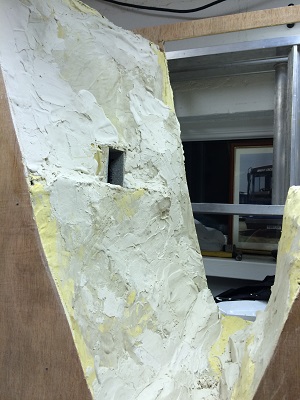 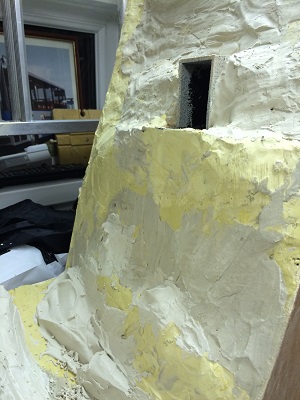 Removed some odd shaped plaster and reshaped parts of the surface. More plaster applied build it out. Started work on some of the wagons, making the body structures and attaching one solebar, leaving it to set firm and square
overnight. 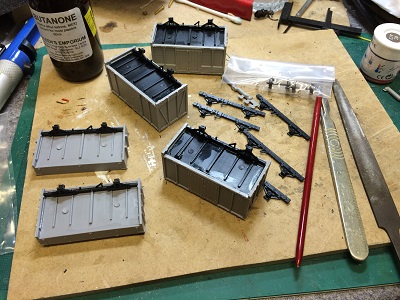 Some hopefully final coats of plaster, with more gentle layering to create contours. Continued with making the wagons, adding other solebar, wheels and brake gear. Tried the bridge, track and some wagons in place to check clearances. Luckily all well. 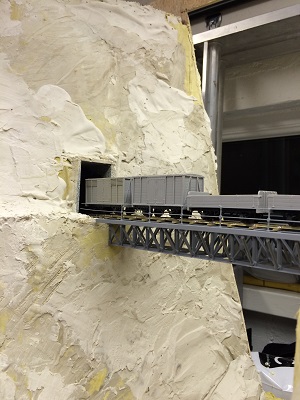 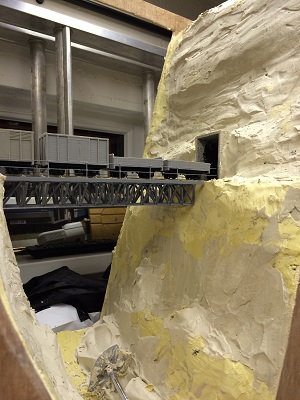 Not much time after the AGM, but tried some painting of the rocks. Not sure the colour is right.

No, the colour wasn’t right at all! My lack of artistic experience mixing acrylics shows very clearly. 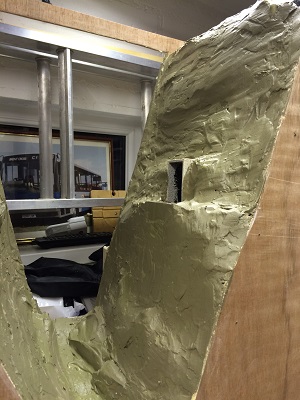 After another attempt, decided that some stone effect spray paint was my best chance. Of course the spray can jammed up before I managed to apply a second coat to all of the face, but I think its OK. Problem is that the paint takes 6 hours to touch dry, and I have no chance of getting the water in tonight. But glued weights into the wagons and finished most of the detail. Painted the sides of the rails. 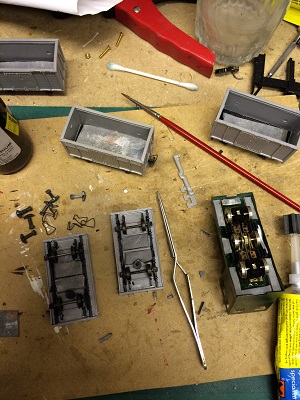 An early start to paint the river bed a mixture of umber and green, and after allowing a couple of hours for the paint to dry poured in the Woodland Scenics water. Problem is it takes 24 hours to dry… Fingers crossed. Viaduct glued in place, and after giving the water 10 hours head start tilted the board back to level to glue the track which has had the sleepers painted. Glued the track down with PVA, applying ballast around the cliff edges and into the tunnels and left it to set overnight. Wired up the track and checked it worked. Installed the LED lighting in the top of the layout and cut and painted the wooden decking for the bridge. 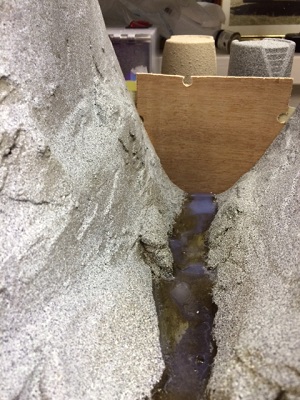 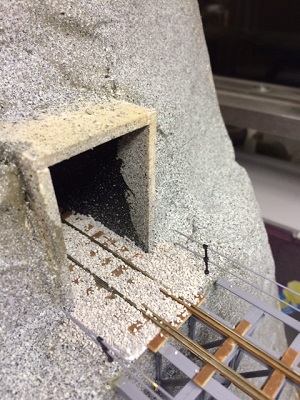 An early start at home, vacuuming the loose ballast off (and knocking some into the water which hadn’t quite set…) and picking a couple of bit out of the check rails. I installed some foam to act as a buffer as the end of the layout is still open, with a 12′ drop to the table that wouldn’t improve any of the stock. Then after a quick breakfast it was off to Keen House ready to set up, trying to remember sufficient tools, extension lead and the stock!

At Keen House, I realised I had the diodes for the ‘safety’ stop round the wrong way, so after resoldering them and cleaning the track got the loco and wagons working. I was confident enough to wire in the auto-shuttle unit, which worked perfectly, and from then of the layout worked perfectly all day, with a bit of track cleaning avery few hours. The wooden decking was dropped into place, and the LEDs adjusted to try to give it a wintery sun low in the sky glow.

So whilst not ‘complete’, and in fact with some obvious shortcomings caused by the limited depth and time, I was very pleased at what was acheived in 18 evenings, now I need to decide whether to persevere with it or ‘park it’. Time will tell.

I did get the layout out a couple more times, but wasn’t happy with some of it and thought it was too difficult to remedy. So I rescued the girder bridge and packed it and the stock away in a small box for possible future use, and the rest of the layout has disappeared into the recycling and bin.

I enjoyed the build, but it was too rushed in the end – however everything is a learning opportunity and building the narrow gauge locos and stock was fun. Somewhere lurking at the back of my mind is a slightly different project, but in the meantime it’s back to work on Minories and Golden Mile