Our new club EM gauge layout “Orchard Wharf” is in need of some stock, and one of the items asked for the peak hour passenger service is a Gresley Quintart set. Why and what is a Quintart – because they are rakes of 5 coach bodies, with only 6 bogies with the coaches articulating and sharing a bogie within the set. I’ve build their similar Quad arts which ran on the GN lines out of King’s Cross (and Minories…) from the Ian Kirk range – which were took a while but were good fun.

But the Ian Kirk 4mm scale LNER range isn’t currently available (whatever their website might suggest – don’t try to order anything) and there seems no chance in the near future. So we were a bit stuck until Andy at Isinglass Models (https://www.isinglass-models.co.uk/)  started to produce 3D printed kits, and after not too long this was available. It is my first go at making a 3D kit so I’m going fairly slowly, but thought it would be worth sharing.

These show the kit as it comes. Unlike plastic the parts are quite fragile and car needs to be taken trimming the parts off so as not to fracture them. I failed, and did create a crack in one window frame, but that was easily fixed with superglue as suggested in the instructions. Here’s a pair of side, a floor and roof (with another under trail fit behind). There are also seats and ends etc. 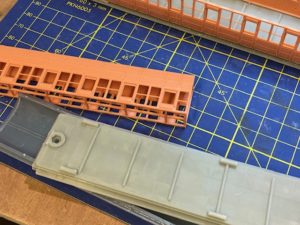 The parts still need some sanding, and I made use of these abrasive pads sold by Shesto (and also available from the tool sales section at Keen House). Again care needs to be taken as it files down the parts quite easily, and the dust probably shouldn’t be breathed in.

I started with the bogies. Them come as a pair of bogies, with extra bits of ‘print’ around the brake shoes that need to be cut off. 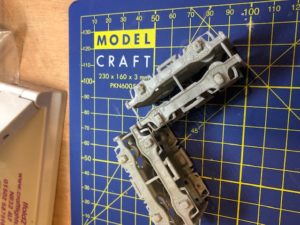 The bearing holes need some slight opening out and deepening to get the bearings in. The lazy trick for plastic moulding of softening up the hole with some butanone and then pressing the bearing into place doesn’t work here… so the trick is to get the drill as straight as possible. The bearing are standard brass in the parts draw from the EM Gauge Society.

The print has some flexibility, but again not as much as plastic so it was tight getting the wheels in. In a couple of cases I hadn’t opened up and pushed the bearing in far enough, so the bearings came out again and I had another go. Again the dust from the drilling is best not breathed in. The picture below shows the wheels in place – but above it the optional bits for the articulation. I’ve opted for now to go for using a brass bolt through the carriage floor into the holes towards the end of the bogies, but its possible to use the pieces at the top of the picture mounted in the coach ‘buffer beam’ and articulate on a single bolt through the middle hole. The former method has stood me well on the Quadarts I’ve built, so made sense to do it here. I’ve got an older quadart built by a friend, which has the latter version and the ‘socket’ has shattered which seems to support my view although the age of the plastic may well be the key factor rather than the design. 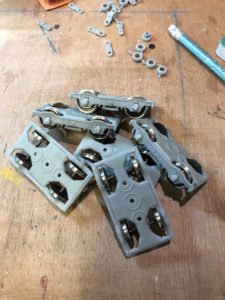 The wheel are from DCC concepts – solid metal which adds some weight to very slightly lower the centre of gravity to give more stability. But they are quite shiny, so I used some chemical blackener. On the right as supplied (minus the pick up spring which just pulls off) and lightly cleaned with a fibre brush to help the reaction. I just drop them in the pot 2-4 at a time and leave them for maybe 30-50 seconds before practicing my tweezer skills to fish them out and drop them in water to stop the reaction. On the left is as they come out of the water, then left to harden off a bit before the treads are cleaned with a fibre brush (last warning -the dust from them isn’t great either..) 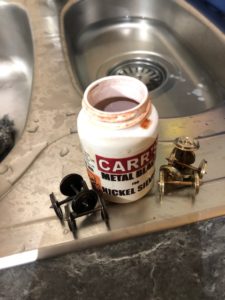 The wheels then go back into the bogies, and put aside to start on the bodies.

Find out more about Orchard Wharf here, and my layout Minories here – and follow us on twitter @orchardwharf  @minorieslayout