I’ve already got a blue Class 101 DMU for Minories. which was re-wheeled several years ago. This is the equivalent model in green, which I bought at a price it was difficult to refuse as part of a batch of stock that looked a bit mucky, presumably after being left out for a long time on a layout. It was going to be used on one of my sons’ layouts but there was a call for stock for our new EM gauge layout Orchard Wharf, and this just about fits the bill for the period.

I was lazy, and ordered a set of Ultrascale replacement wheels rather than trying to adapt other types, and they arrived in the almost record time of a couple of months. That’s not sarcastic – the lead time has been much longer but they are worth it as they are so quick and easy to change, and reliable once in. 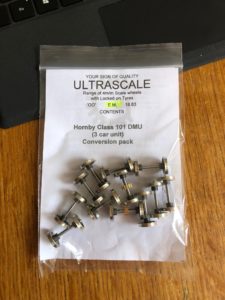 First up the unit needed a quick run to make sure it worked before I started to mess around – and due to the lockdown I couldn’t get to the Club, so resorted to a 35 year old test track of OO gauge track with the Bachus Saddle rolling road reduced to narrow gauge (16.5mm). A bit noisy, but it all ran smoothly, so to change the wheels. 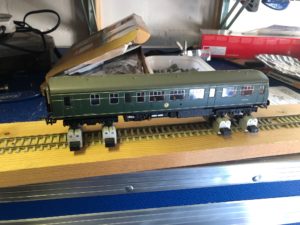 First job is to remove the bottom of the motor bogie, which just unclips to reveal the wheel sets. First picture shows the old wheels, which just pull out vertically. The second shot shows one new wheel in. The third shows the only tricky part of this bogie – holding the soft phosphor bronze pickups back against the block whilst the wheel set goes in so they don’t get damaged. It’s a pair of spring closed tweezers doing the job; the axle is just resting in place, and needs pushing into the axle slots like the one on the right. These wheels come with the spacers in place to allow just a bit but not much side play.

After checking the pickups are in place, touching the backs of the wheels, the last thing to do before putting the top in place is to remove the supplied coupling from what looks like a NEM pocket, before gently pushing it back onto the bogie. 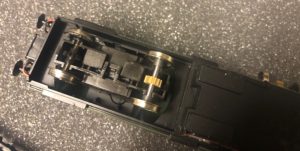 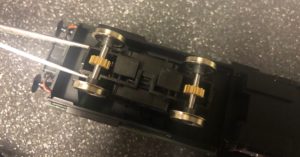 The other end of the motor coach is slightly different. There is a keeper plate that is a bit fiddly to release – I had to pull the bogie out of the floor to get a screwdriver underneath to release the clip. But then it came out. At the same time I released the coupling from the pocket. The wheels came out, but so did the pick ups. With apologies for the picture quality, you can see the pick ups here. They are held in place by the wheels and the keeper-plate, and with both out they tend to move around. Now this wasn’t helped, I realised, by having the bogie detached from the floor, so I clipped it back in and then pushed the wires back into the floor, and the pickups just about stayed in the right place.

In the pack, 8 of the remaining axles have pinpoints, two don’t and it is these that go into this bogie.  The pickups are short enough to be able to just wiggle the wheel down in place and check they are touching the wheel back. Then the keeper plate goes back in place and we should be good to go. Then it’s onto the EM gauge test track, with the Saddle put back to correct (18.2mm) gauge for a quick run. Success. 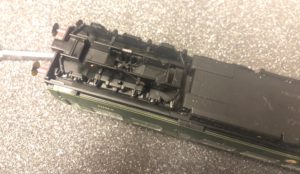 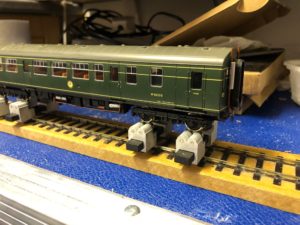 The rest of the wheels are pinpoints and straight swaps – out and in. As usual it’s a bit tighter getting them in than out, as the wider gauge reduces the play. But here’s the old and new wheels side by side to show the difference, and a bogie with the new wheels in. Irritatingly, these have the tension lock coupling moulded to the bogie, to they need sawing off and a new Kadee coupling installed. 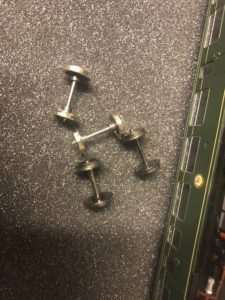 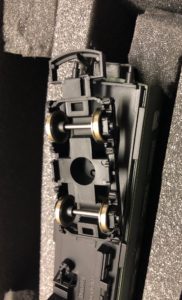 So that’s the unit ready to run on EM gauge, next steps are to sort the couplings, give it a bit of a clean, renumber and then weather it down.

Find out more about Orchard Wharf here, and my layout Minories here – and follow us on twitter @orchardwharf and @minorieslayout

There are plenty of other modelling blogs to browse – including building track, making good board joints, converting a loco to EM, converting RTR DMUs, or about our layouts.