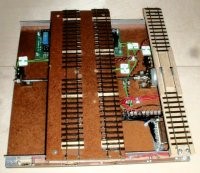 It looks complicated but it is not. It was derived through trial and error with a number of attempts at a suitable drive system were attempted before one that worked was found. 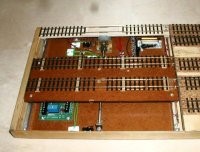 The complete traverser mounted in the baseboard 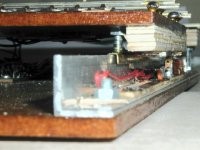 I used some MDF, (careful with the dust when you cut it – use a breathing mask), for the base and the traverser table. Four 25 x 3mm bolts were fixed at each corner and then on the tip of them was soldered some brass U-channel – this located on some aluminium angle so that it could slide. When building the drive, I started off with a motor and gearbox assembly from an educational site but found that the motor barely had enough power for the gearbox and certainly not enough to drive a traverser. It was only a small 4.5V motor and so I tried another from a similar source that was somewhat bigger with the same result. Frustration and the beginning of real worry. As luck would have it, I was speaking to John Jesson about something entirely unrelated and mentioned my problems. “I’ve got just the motor!” says he and so he had! I dummied up the drive as a direct coupling and there was loads and loads of power. 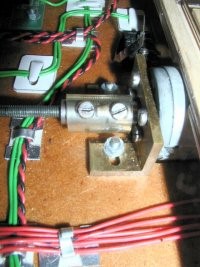 The screw drive is a section of 4 mm studding – it is the second one fitted – the first had a slight curve in it – this one also has but it is now a lot less after checking on a piece of mirror glass. On the underside of the table is a bracket with two screws soldered and this drives the table. I originally had a fixed coupling – turned on an old Unimat SL lathe but found that the vibration was far too much and therefore cut I with a fret saw and used a piece of polythene tube to create a very crude flexi-coupling. (The clean holes in the polythene were cut with a standard paper hole punch!). The motor bracket was made from some brass angle I salvaged years ago from a scrap merchants.. 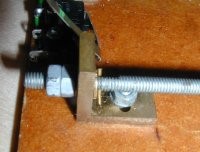 The other end of the screw has a fixed bracket with a bit of adjustment – the very fine taper pin is used in the clock trade. Two microswitches were fixed at each end to prevent over-running and, in conjunction with the relay board (Trainlink), swap the polarity of the power to the motor. At the moment, a set of fairly crude wiper system is used to get power to the relevant track on the table, but I hope to replace this in time with a properly set up system of photo cell sensors.